First visit at the new lake

Not far from the Baltic Sea coast lies the picturesque Amber Lake. According to a local legend, this lake got its name from the numerous carps living in it and their scales glittering in the sun like amber.

Therefore, the Amber Lake is also very popular with fans of carp fishing. However, it is not known only for its carp. According to stories of the locals, it is inhabited by a true monster. It is rumored that strange noises can sometimes be heard from the water at night, and some eyewitnesses even swear that they saw a shiny black shadow in the moonlight. Legend has it that the monster is the spirit of a nobleman who lived by the lake and was killed by bandits. That is why they call it the “Black Baron”. Many have tried to capture this legendary monster, but so far everyone has failed.

In this update, we present you not just another new body of water. We have also significantly improved carp fishing to make it even more exciting and detailed. New rigs, new fishing techniques, new carp species and many more innovations are waiting for you. But that does not mean that the Amber Lake will only be interesting for carp anglers.

However, we have also not forgotten the friends of other fishing methods such as spinning and float fishing. The refinement of the carp fishing is only the first step in further improving all fishing methods. 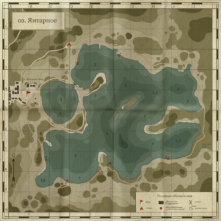